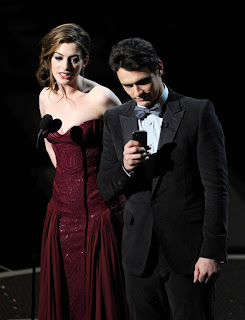 This is not the post I expect it to be. Usually after the Oscars I would be posting all about who won and lost and how everyone looked. This year however, the show was noticeably boring at best. From what I can piece together…the producers were trying to give the show a younger and hip vibe. Instead the show was about as hip as the word hip. Poor Anne Hathaway, you can tell she was trying so hard. After about 5 minutes of the show it was clear this was going to be a long and painful evening. Here is a wrap up of the evening’s events:
Anne Hathaway: A for effort. But you’re not a comedian. Flubbing lines and changing gowns does not a host make. Plus, if your dresses are all you have to offer then you should have changed twice as much. If you’re trying to distract an audience take a tip from Rupaul. Big hair, big make-up and tacky as hell.
James Franco: First he walks out on stage tweeting on his cell phone. I’m all for social media, but you have to address it. Such as “I am tweeting during the show to bring the Oscars on everyone on Twitter.” Otherwise it just looks like a stoner on his cell phone. Apart from getting in ugly drag, what did he do? He spent about most of the show looking bored as Hathaway did all the work. Epic Fail James Franco!
A note to the Academy: if you’re looking for a young cool stoner, call Seth Rogan. At least he’s funny.
Kurt Douglas: at 94 you were the funniest part of the show.

Melissa Leo: There is something about you I just don’t like.

The Awards: The winners were everyone who was predicted. “And the winner is…The King’s Speech!” *Yawn* I hate that. My favorite part is an upset or a surprise.

My recommendations for next year:

Invite Kanye. His absence made me sad. I like Kanye in all his rude glory. How fun would it have been if he ran on stage and snatched that Oscar from Melissa Leo! Awesome.

Hire Naomi Campbell as the red carpet host. She can just sit high up in a booth with a big bag of cell phones that she’ll throw at poorly dressed starlets.